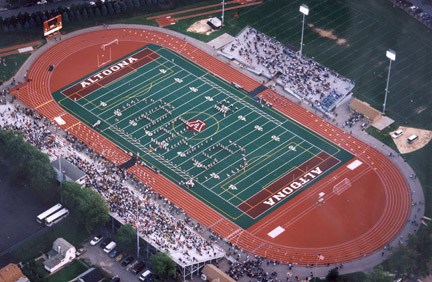 Mansion Park is open to the public during the following times:

Altoona Area School District's Mansion Park Stadium has long been recognized as one of the finest athletic complexes in Pennsylvania. The stadium, which has a seating capacity of 10,400, is a source of community pride and regularly serves as the site of a variety of events which benefit the economy of the Altoona-Blair County area.

In the summer of 2009, Sports Construction Group, LLC installed “Trophy Turf,” which has a 48-ounce face weight and inlaid football and soccer lines.

For 22 consecutive seasons, the playing surface has received rave reviews from players and coaches as athletes have experienced controlled footing regardless of the weather conditions. Most importantly, there has been a significant decrease in serious injuries since the artificial turf was installed.

During a typical fall season, more than 60 events take place on the turf. Altoona High varsity and jayvee teams, Altoona Area Junior High School ninth grade teams, and Bishop Guilfoyle High School all play home football games at Mansion Park. The stadium is also the site of AAHS boys and girls soccer matches and countless practice sessions. District and interdistrict football and soccer playoffs are held each year at Mansion Park, the home of the PIAA Football Championships from 1992 through 1997. The Pennsylvania Scholastic Football Coaches Association East West High School All Star Game was played at Mansion Park from 2001-2010.

Numerous high school and junior high school track meets, including the District 6 Class AA and AAA championships and the West Central Coaches Meet, are held at the stadium each spring. The track is also used extensively on a daily basis by hundreds of community residents who enjoy walking and jogging.

Music events have also been well-received. Appearances by the Beach Boys, Up With People, the United States Marine Drum and Bugle Corps, the Penn State Blue Band, the Ohio State Pride of the Buckeyes Band, the University of Notre Dame Band of the Fighting Irish, the University of Illinois Marching Illini and the Indiana University of Pennsylvania Marching Band have attracted huge crowds. Drum Corps International competitions were held in 1998 and again in 2000.

Altoona Area High School's Commencement is scheduled at the stadium each year. Mansion Park is also the home of the American Cancer Society's Relay for Life.

Earlier this year, a new scoreboard featuring a video display board with an improved stadium sound system was erected thanks to the generosity of local sponsors. 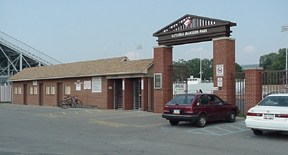 For complete information to schedule an event at the Altoona Area School District Mansion Park Stadium, please contact the Athletic Office, 1415 Sixth Avenue, Altoona, PA 16602, 814-946-8289 or fax 814-946-8578.
Directions
With the completion of Interstate 99 (Route 220), a limited access highway, from the Pennsylvania Turnpike through Altoona to Bald Eagle, it is easier than ever to reach Mansion Park Stadium.

From the WEST and SOUTH and from the EAST via the Pennsylvania Turnpike
From the NORTH
From the EAST via Route 22
For additional clarification, call Paula Foreman, AASD Community Relations Director, at 814-946-8424 or E-Mail.